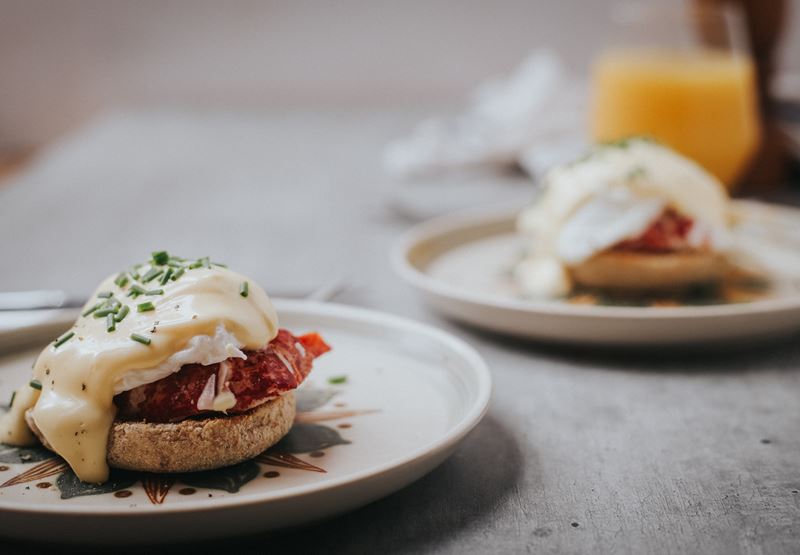 Classic Eggs Benedict is a bit of a luxury in itself – but our lovely, locally-caught lobster lifts it to a whole new level. It requires a bit more effort than your average breakfast or brunch recipe, but the taste is definitely ample reward for all your hard work! Serves 2.

Please note; for this recipe you will need a mixing bowl that can sit in the top of a medium-sized saucepan (or a Bain Marie).

To prepare the lobster: first, remove the claws by twisting them at the point where they join the body, then repeat to remove the rest of the legs. To extract the claw meat, give the claw shells a sharp tap with something fairly hefty, like a rolling pin – but don’t be too heavy-handed, as the aim is to crack the shell, not smash it. Peel the shell away and pick out the meat, being careful not to pick up any bits of shell (if you don’t have a lobster pick, a skewer will do just as well). Take the meat out of the legs by using the rolling pin to push it out firmly.

Next, split the lobster in half along its length by inserting a large, sharp knife at right angles to the edge of the head and pressing down firmly. The body and tail should split lengthways. Cut through the head in the same way. You should now be able to separate the two halves. Remove and throw away the pale stomach sac, green liver, gills and the dark intestinal thread that runs the length of the tail. Remove the meat from the tail, and scrape out the soft flesh from the shell.

Now you’re ready to make the hollandaise sauce. Fill and boil your kettle, then put the butter in a small pan over a low heat and let it melt. Keep the pan warm over a very low heat, and skim off any white solids that appear on the surface of the butter. Meanwhile, half-fill a medium-sized pan (or the base of your Bain Marie, if using) with hot water from the kettle and bring it up to the boil, then reduce to a gentle simmer. Put the egg yolk, white wine vinegar, a pinch of salt and ½ tbsp iced water in a heatproof mixing bowl (or the top part of the Bain Marie), then sit it on a tea towel on the worktop to keep it steady, and use an electric whisk to mix everything together for 2 minutes, until lighter in colour. Next, set the bowl over the simmering water in the saucepan – it should sit above the water, rather than touching it - and continue to whisk for 4-5 minutes, until the mixture is very thick and pale. Take the bowl off the saucepan and add the melted butter in a very slow, thin trickle, continuing to whisk as you do so, until you have a thick, creamy sauce. Add the lemon juice and check the seasoning, adding salt if you think it’s needed (you can also whisk in a little water if the sauce seems too thick). Cover the sauce and keep it warm.

Put about 5cm of water in a saucepan, bring it to the boil and then reduce it to a low simmer. To poach the eggs, break each one gently into the water – if you’re not confident with this, you can break each egg into a ladle or small cup first, then tip it carefully into the water. Put the muffin halves or bread in the toaster while you wait for the eggs to poach (about 4 minutes). Put a piece of the toasted muffin on each of two plates, then pile each with half of the prepared lobster. Use a slotted spoon to remove the cooked eggs from their pan, then carefully sit an egg on top of each lobster muffin. Spoon the sauce over the top, sprinkle over the snipped chives and a generous grind of black pepper, then serve straight away.