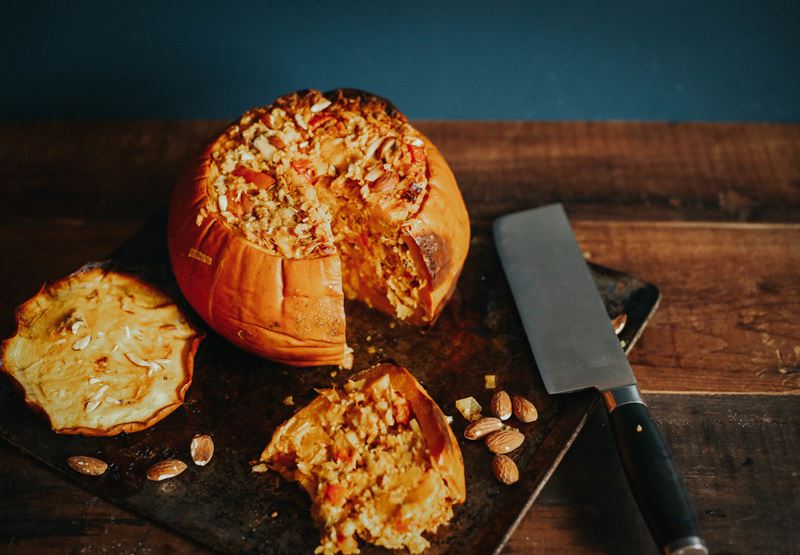 An impressive-looking (and delicious) vegetarian centrepiece for any autumn table! Serve this baked pumpkin with salad leaves or green veg and some plain yoghurt for a hearty, healthy meal. Serves 4-6.

First, prepare the veg: cut the leeks into thin slices, then do the same with the garlic gloves; cut the tomatoes into small dice, discarding the tough cores; trim a 5cm slice from the top of the pumpkin to make a ‘lid’, scoop out and discard the seeds, then use a small knife and a spoon to cut out most of the pumpkin flesh, leaving a thin shell. Cut the pumpkin flesh into small pieces and set aside. Finally, put the slivered almonds in a saucepan and toast over a medium-high heat until golden and smelling fragrant (this will take about 5 minutes, and you’ll need to shake the pan every so often to prevent burning), then tip into a saucer to cool.

Start the rice cooking, according to the pack instructions. Next, place a large pan over a medium heat and heat the oil for a second or two, then add the prepared leeks and garlic. Stir in the chopped sage, the smoked paprika and the turmeric, then cook for about 10 minutes, stirring every now and then. After 10 minutes, add the chopped pumpkin flesh and cook for another 10 minutes, or until the pumpkin is turning golden and starting to caramelise - stir frequently to prevent the veg sticking. When the mixture is ready, tip it into a large mixing bowl.

Preheat the oven to 180°C (Gas Mark 4). When the rice has cooked, drain it thoroughly to remove as much water as you can, then tip it into the mixing bowl containing the cooked pumpkin, along with the tomatoes and toasted almonds, and grate in the cheese. Add a pinch of salt and a few turns of the pepper mill, then give everything a good mix and check the seasoning, adding more salt or pepper if you like. Stand the pumpkin shell on a baking sheet and spoon the stuffing into it, right to the top (if you have any leftover stuffing you can either spoon it into a small dish and bake it alongside the pumpkin, or freeze it and use it to stuff smaller veg, like peppers or Portobello mushrooms, for another meal). Put the lid on the pumpkin and bake for at least an hour, and possibly up to an hour and a half (depending on the size of the pumpkin); when it’s ready, the pumpkin shell will have turned golden brown. When cooked, take the pumpkin out of the oven and leave to stand for 5 minutes, then take it to the table and cut into wedges to serve. 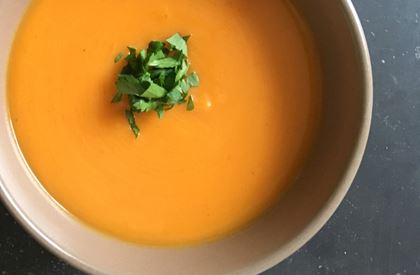 The UK has a fairly short pumpkin season, but there are lots of beautiful, delicious-tasting varieties out there. Leave the giant orange jack-o’-lanterns at the supermarket, and seek out the smaller, sweeter pumpkins and squashes for this richly coloured autumnal soup. Serves 4.