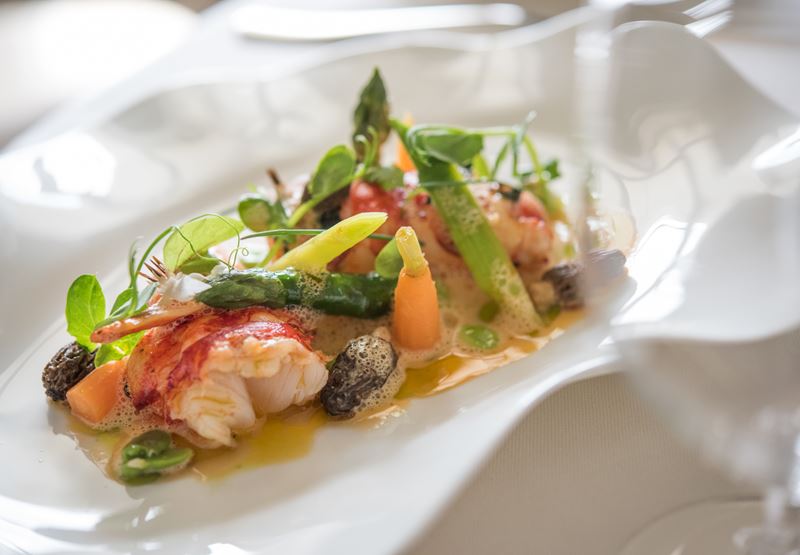 Michael Caines's Fricassee of Lobster with Summer Vegetables and Herbs features Greendale Farm Shop's fresh Lyme Bay Lobsters. Watch how he cooks this fabulous dish and then have a go yourself.

To finish the bisque

Firstly, kill the lobsters by pressing a sharp knife into the lobsters’ head about an inch or an inch and a half from between the eyes towards the tail. Press down until the blade goes all the way through to the cutting board and draw the knife towards the eyes. Now remove the tails and claws. Blanch the tails in boiling water for 30 seconds only, and then place into iced water. Bring the hot water back up to the boil and then add the lobster claws, bring to the boil again, cook for 3 minutes then place in the iced water. Peel the lobster tail to remove the tail meat and crack the claws to remove the claw meat, keeping the claws as whole as possible. Place the lobster meat on a tray for later use.

Next make the lobster bisque. Place a roasting tray in a pre-heated oven at 200°C/gas 7. Heat 400ml of the olive oil and then add the lobster carcasses, roast for 30 minutes (do not let them burn) and then remove from the heat. Deglaze with the Cognac. Then in a stainless-steel pan, sweat the carrots, onions, fennel and garlic in the remaining 100ml of olive oil for 10 minutes and cook without colouring. Add the spices and herbs and cook for a further 5 minutes. Now add the tomato purée, fresh tomatoes and water and cook out for a further 10 minutes. Then add the roasted carcasses and the juices and add enough water to be below the top of the carcasses then bring to the boil. Simmer and cook for 20 minutes then pass through a colander and leave to drain well. Then pass through a fine sieve, Taste and adjust seasoning. Just before you are ready to serve, heat 200ml of lobster bisque and the unsalted butter and blend with a hand blender until frothy. Season with salt, pepper and a drop of lemon juice.

Cook the vegetables in boiling salted water, or in a steamer.  Peel the broad beans to remove the bitter skins

To prepare the dish for serving, heat some olive oil in two separate non-stick frying pans (one for the tail and the other for the claws), and carefully add the lobster. Place the pans in the oven at 200 °C / gas 7 for 2 minutes, then turn the lobster over and add some chopped tarragon and continue to cook for a further 2 minutes. Slice the lobster tail into 6 pieces and dress around the bowl or plate, place the claw meat into the middle and then scatter the vegetables around. Heat and froth the sauce as previously described and spoon around the dish. Drizzle some of the cooking oil around and sprinkle the picked herbs over the dish to finish. 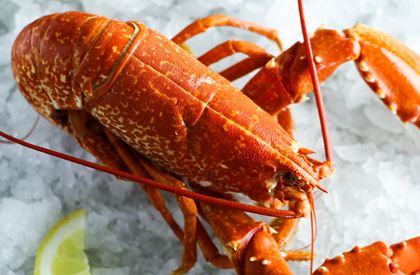 Watch how to crack a lobster

Lobster – there’s nothing quite like it, especially when it’s freshly caught by our boats off the Devon coastline. Supplied cooked and whole, so no flavour is lost, it’s ready to be cracked, picked and dressed. Delicious! Watch an extract from our recent Facebook live event where Ethan, our fishmonger, shows you how we crack a Greendale lobster. 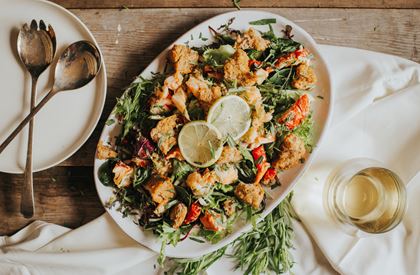 Made with luscious fresh lobster, crisp croutons and a deliciously different dressing, this special salad makes ‘eating your greens’ a little more decadent! Serves 2 as a main course or 4 as a starter. 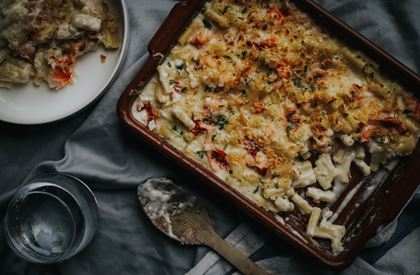 Elevate humble Macaroni Cheese to an altogether more luxurious level with the addition of a whole locally-caught Greendale lobster! There are more complicated versions of this recipe out there, but (because of the time it takes to prep the lobster) we’ve tried to keep it simple.