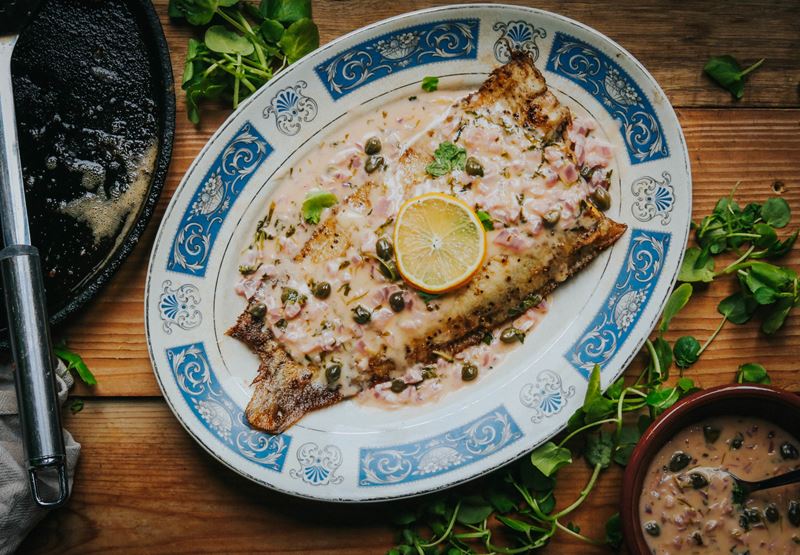 Planning a romantic meal for two? This delicious Dover Sole recipe is well worth a try; it may sound a bit fiddly, but the fish is actually pretty straightforward to cook (and the ‘fancy’ sauce is bound to impress!). Serve with your choice of steamed veg or salad. Serves 2.

*For this recipe, each Dover sole needs to be trimmed on both sides (supplied top-skinned only). If you are buying your sole at Greendale Farm Shop, ask our friendly fishmongers to skin them completely for you – otherwise, you can just peel the skin off the fish when it has cooked.

Heat the oven to 200°C (Gas Mark 6) and use the extra butter to grease a large baking tray. Next, use a sharp knife to trim away and discard the thin ‘frills’ from the sides of each fish - cut the heads off, too, if preferred. Season the fish lightly on both sides with salt and pepper, then set aside.

To make the sauce, slice the ends off the lemon and then cut it in half. Set one half aside and peel the other thickly, so that all the white pith is removed with the skin. Use a small knife to cut between the lemon segments, removing the flesh from between the membranes and dropping it into a bowl. Take out and discard any pips, then chop the flesh finely. Next, put the dry white wine, white wine vinegar and prepared shallot into a medium saucepan, together with 6 tbsp cold water, and bring the pan up to the boil. Reduce the heat, then simmer vigorously – stirring occasionally - until the liquid has reduced to about two tablespoons’ worth. Add the cream, then simmer again, stirring, until the liquid has again reduced down to two tablespoons. Take the pan off the heat and set aside.

Tip the seasoned flour on to a large plate, then place a frying pan - large enough to accommodate one fish - on a medium heat and add 25g of the 50g of butter. Let the butter melt without turning brown. Increase the heat under the pan to high, then quickly dust one of the fish in the plate of seasoned flour and tap off any excess. As soon as the butter is foaming, put the floured fish in the pan, top-side down, and cook for two minutes. Turn the fish carefully and cook for two minutes on the other side, so that it is nicely browned all over, then transfer it to the greased baking tray. Add the remaining 25g of butter to the frying pan and repeat the flouring and cooking process with the second fish, then put the baking tray into the hot oven and bake the fish for 8 minutes.

Shortly before the fish have finished their cooking time, put two plates into the oven to warm and then return the pan of sauce to a high heat. As soon as it is hot through, lower the heat a little and gradually whisk in the 75g of chilled butter, a few cubes at a time, until the sauce is smooth and thick. Adjust the seasoning to your taste with a little salt and pepper, then stir in the chopped lemon pieces and most of the capers and parsley. Remove the pan from the heat.